She is Murong Xun's sister. She is Chu Feng's enemy, she is the third girl who was raped by Chu Feng.[1]

Volume 5 - The Battle of the Overlord Domain[]

Murong Wan, together with Yan Ruyu and Ya Fei disappears after an incident of a gate opening on Misty Peak leading to an Immortal Road. At the end of the road there was a stairway that ascends to Beyond the Heavens (out of Ancestral Martial Lower Realm).

Chu Feng got a hint about her whereabouts from Gou Za and turned out she is one of the 3 princesses of Galewind Hunting Clan together with Yan Ruyu and Ya Fei and having a cultivation stronger than Chu Feng himself. The Face from Misty Peak later told Chu Feng that he took them in as his half disciples because he was bored and decided to help them because of their relation to Chu Feng, giving them a power that when fully awakened would turn them into powerful experts. He also erased their memories of their past lives so they can easily integrate with the Galewind Hunting Clan to further promote their growth. He promised Chu Feng that he would give them back their memories and release them when they have completely awakened this hidden power and finished their training. 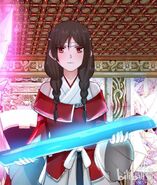