1st Rank Half Martial Ancestor (Past)

Qing Xuantian is a person with a legendary Divine Body that appeared in the Azure Province 10,000 years ago, before the founding of the Jiang Dynasty. Little information about this legendary figure has persisted over the millennia, however various conclusions have been made based on the legends and legacies that he left behind.

The 9 powerful families had equal strength and this was maintained for roughly 200 years. 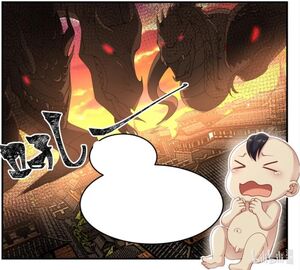 On that year, a boy was born into the Qing family. On the day that the boy was born, golden, colourful light engulfed the entire sky. Four enormous beasts surged and roared mid-air and they shook the entire continent.”

“That boy was naturally intelligent. According to the legends, one month after he was born, he could speak. On the second month, he could stand up and walk. When he was 1 year old, he started to learn the Four Arts. He was familiar with all the ancient books in the world at the age of five.”

Legends indicate that when Qing Xuantian was born with a great and unique phenomenon which lit up the skies above the land that would become the Azure Province. This type of phenomenon is known to occur only when an individual with a Divine Body is born. It's said that when Qing Xuantian's unique phenomenon occurred, four mighty Divine Beasts manifested in the skies. It can be assumed that these four beasts were the Azure Dragon, White Tiger, Vermilion Bird, and the Black Tortoise.

The unique phenomenon has always associated with the unique powers of the particular Divine Body which it represents. Qing Xuantian's unique ability manifested as 4 peerless secret skills that, once he reached a high enough realm of cultivation, were able to separate from his body entirely and follow him / move about with their own sentience like pets. Each Secret Skill was specialized in a specific role.

It is stated by Chu Feng's father, Chu Xuanyuan, that when he was in a Starfield he once looked at the ranking of the strongest Divine Bodies and the Four Divine Beasts Divine Body is ranked the third strongest in all Beyond The Heavens. Legends surrounding Qing Xuantian state that he was a true martial cultivation genius among all geniuses. At a very young age, below 15 years old, Qing Xuantian had already reached the Martial Lord realm and mysteriously vanished. Legends in the Eastern Sea Region stated that around 10,000 years ago, (from Chu Feng's time), a Son of Magma was born and began slaughtering throughout the Eastern Sea Region. During that time a mysterious young man appeared with shocking power and 4 shocking pets, an Azure Dragon, White Tiger, Black Tortoise, and Vermilion Bird, appeared and sealed the Son of Magma deep underground where it could no longer harm anyone.

Another legend concerning Qing Xuantian and his Four Divine Beasts was that they alone defeated a massive army of Evil Spirits that were wreaking havoc across the Nine Provinces and surrounding continents. (Every Evil Spirit is at least in the Heaven Realm.)

Eventually, Qing Xuantian returned to his homeland and created a shocking Emperor Tomb where he secretly left his legacies. He imprisoned many surviving Evil Spirits, that he defeated previously within the tomb as guards to his treasures. Additionally, he created 4 entrances which were all located in the land that eventually became the Azure Province. He sealed one of each of his four Secret Skills relatively close to each entrance. Ultimately, 2 of the 4 entrances were opened by the Azure Dragon Founder and White Tiger Clan Founder respectively, who took their titles after the Secret Skills which they obtained and used to rise to prominence in the Nine Provinces.

Chu Feng seems to be fated to acquire the entirety of Qing Xuantian's legacy. Over time, Chu Feng has successfully come across the entrances to the Emperor Tomb, which the majority of World Spiritists wouldn't be able to accomplish even if they tried. As a result, he directly acquired the White Tiger Slaughtering Technique and Black Tortoise Armor Technique by his own efforts. The Azure Dragon Founder promised and delivered on passing on the Azure Dragon Dashing Technique to Chu Feng for finding a way to revive him. And finally, Qiu Canfeng who acquired the Vermilion Bird Revival Technique has accepted Chu Feng as his sole disciple, and promised to pass on the technique to him if Chu Feng can free him.

This Son of Magma was called the Magma Emperor by the people of the Holy Land and had the cultivation of a 1st ranked Half Martial Ancestor which in the Ancestral Martial Lower Realm (The Four Sea Regions and the Holy Land of Martialism together) was an apex existence and when Qing Xuantian fought it, he was forced to use the bodies of the Four Divine Beasts to seal it after he transformed the Four Divine Beasts back into secret skills and placed them into the Emperor Tomb however he never recovered them and when the Magma Emperor revived and Chu Feng defeated it, it told the Four Divine Beasts that Emperor Qing had abandoned them for a stronger Divine Body.

It is known that he had triggered the Golden Ancient Era’s Immortal Needle in the Ancient Elf Kingdom, which is said to be extremely hard to trigger even for Elves themselves[2].

When Chu Feng met his Father he told Chu Feng that there was a chance for him to become the Divine Body of the Four Divine Beasts and become a Divine Body if when he went Beyond The Heavens he helped a man called Ox-Nosed Old Daoist, who had the power to implant Divine Power into a ordinary person.