World Spiritists are cultivators that have spiritual energy and knowledge of spirit formations. World Spiritists have many abilities; forming barriers of spirit energy that can physically block attacks, manifesting World Spirits, creating formation constructs to attack foes, and even "curse" like effects such as suppressing the cultivation of others. They're often unmatched when fighting against non-world spiritist opponents of the same level of cultivation (exceptions include individuals with high quality bloodlines, divine bodies, forbidden mysterious technique cultivators, and demonic mysterious technique cultivators).

In rare cases, (such as with Chu Feng), a World Spiritist may be able to progress in spirit energy quality earlier than normal, (meaning at a slightly lower Rank/Realm of Martial Cultivation than most individuals), through means such as consuming Spiritual Fruit and other spiritual foods that enhance spiritual power. (Chu Feng ate two fully formed Spiritual Fruit to revive Eggy[1][2], and shortly after received the additional benefit of improvement to his spiritual power quality, progressing to the level of Grey Cloak in chapter [3].

The occupation of World Spiritist is widely respected and in demand almost everywhere. World Spiritists are capable of laying down long-lasting Spirit Formations that can provide fast teleportation across a distance, or powerful barriers that span large areas. Such formations, although common, take a significant amount of knowledge, skill, time and energy on behalf of the World Spiritualist(s) to lay down. In spite of the costs to employ World Spiritists for such a task, many organisations willingly pay for such life-saving spirit formations. Massive barrier formations can hold off invading enemies, while teleportation formations allow weaker members to flee to safety.

World Spirits cultivate by absorbing Source Energy, which can be found in all living beings and remains in the corpses of most beings until absorbed. World spirits rely on a world spiritist to absorb source energy for them, which they then refine into their own power. It's stated that they have their own rankings for cultivation, but these ranks have not yet been named or explained. Instead, Eggy (Chu Feng's first world spirit) simply refers to her cultivation as being equivalent to each martial cultivation realm and rank when relevant.

Source energy appears to greatly increase in quantity and quality with the cultivation level of the individual/corpse that it comes from. For this reason, it is highly beneficial for a world spirit to refine equal or higher cultivation realm source energy, but of little benefit to refine lower realms of source energy. This is similar to how martial cultivators of a particular realm will refine medicines and beads of that realm or the next realm above them, but not lower.

Once a world spirit has formed a contract with a world spiritist, they are able to share their cultivation with the world spiritist. Chu Feng uses this method to increase his strength to fight stronger opponents on a number of occasions, however notes that borrowing Eggy's cultivation to reach a higher realm and/or rank is far from comparable to the battle-power that he has once he personally reaches that same cultivation.

The cloaks that world spiritists wear are imbued with various properties, which improve with each progressive rank as do the value and rarity of the materials used, and time / effort used to craft them. World Spiritist cloaks imbued with spirit formations which are resistant to both normal martial attacks and spirit energy based attacks. They can conceal the wearers cultivation when worn so long as the wearer does not actively emanate their aura.

The cost of cloaks after the grey cloak is never revealed.

The combative abilities of a World Spiritist significantly increase with each Spirit Energy colour rank increase. 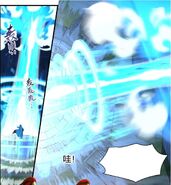 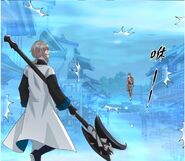 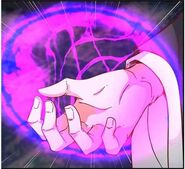 However, Saint-cloak was not the end for World Spiritists. Above Saint Cloak Dragon Mark is Dragon Transformation Sensation and separated into nine levels, Only Dragon Mark Saint-cloak World Spiritists are able to comprehend it[5]. Not only will the Dragon Transformation Sensation allow a world spiritist’s world spirit techniques to become even more exquisite, the comprehension of every level will also allow the world spiritist to receive great battle power.

God-cloak World Spiritists grasped legendary God-level spirit power. They possessed strength akin to gods. An ordinary spirit formation from them was capable of destroying an entire world. A slaughtering formation from them would be able to destroy multiple worlds at once, bringing about massive destruction and death to a Starfield.

There are 7 main spirit worlds:

The Fairy and Demon world spirits are generally considered as stronger world spirits, with Asura world spirits being the most powerful by a large margin. Virtually all world spiritists can only have spirits from ONE world. Only one person in history has had more than one type of world spirit, that is Jie Ranqing, and she possesses the ruler's bloodline and is able to connect to all spirit worlds as well as physically visit them. It is to be known whether Chu Feng can achieve the same feat as his mother.

Eggy is pretty sparring with information; frequently providing techniques, insights, and advice regarding anything having to do with being a World Spiritist.

Skilled World Spiritists of the Blue-Cloak rank can grant Spirit Power to others, with the only requirements being that the spirit power recipient have a sturdy enough physical body to endure the infusion[7].