Edit
SPOILER ALERT!
This page/section shows content not covered by the current translations.

Volume 2 - Sweeping Through the Nine Provinces

Volume 2 - Sweeping Through the Nine Provinces[]

Chu Feng hears much of Zhang Tianyi After as he travels about, even idolizing Zhang Tianyi for a long while. Zhang Tianyi possessed a greater level of cultivation and was only surpassed by Chu Feng after he acquired over 100,000 Heaven Beads from helping to defend the Jiang Dynasty from three opposing Dynasties, and even eliminating those Dynasties to acquire their treasuries.

When arriving in the Eastern Sea Region and on the way to enter into the Four Seas Academy, Zhang Tianyi pulls his sworn brother Chu Feng aside and reveals several secrets to him. The secrets start with the fact that he appears to suffer from amnesia. His earliest memories are of being a young child and waking up one day in a foreign land, the Azure Province, while only having two possessions. The first of these possessions is a black Jade Ornament with a sword carved into it. Chu Feng notes that the material is incomparably hard and that even with his unusual strength, he cannot break the ornament. The second item that Zhang Tianyi possessed was a scroll containing his Forbidden Mysterious Technique which grants him his unnatural Battle Power that is comparable to a Divine Body / Bloodlines, and what manifests Zhang Tianyi's signature blue flames. Zhang Tianyi asks Chu Feng to keep an eye out for information regarding his family based on the ornament and scroll.

Volume 5 - The Battle of the Overlord Domain[]

Zhang Tianyi appears again in the Holy Land of Martialism in the Emperor Gong successor contest.

It's revealed that he uses Emperor Gong's Mysterious Technique as his eighth successor, the Immortal Fire Tri-layer Transformation.

Zhang Tianyi history background is described in ch. 1783/4: An unknown enemy led by a man with a snake mark on his forehead, led a siege to the Zhang clan. In his family's escape, Tianyi's father held back the forces while his mother and clansmen escaped. Whilst separated, Tianyi's mother sacrificed herself to save her son while the remaining Zhang clansmen took Zhang Tianyi away. However despite their efforts, his mother and the remaining clansmen were killed, while Zhang Tianyi was presumed dead. Upon finding their dead bodies, Tianyi's father could not sense the imprint he left on his son's body, due to perhaps the distance of crossing realms. As Zhang Tianyi had somehow (unknown how) ended up in the Eastern Sea Region/Nine Provinces, where he would grow up as an orphan. It was only when Zhang Tianyi returned to the Holy Land of Martialism, that his father was able to detect his imprint again, find/save him, and ultimately reunite with his son. Zhang Tianyi and his father are the remaining survivors of the Gong clan (true surname Zhang).

The true name of Forbidden Mysterious Technique that Zhang Tianyi cultivates is named Immortal Fire Tri-layer Transformation(ch. 1784). It is later revealed that his father's name is Zhang Ming, who has a cultivation of a 5th Rank Martial Emperor and is a Royal Cloak - Dragon Mark world spiritist.

Volume 7 - Return of the Discarded Child[]

After Chu Feng once again returns to the Holy Land of Martialism, he meets his old friends and family members. There he found a volcano which had been dubbed a "Sacred Cultivation Ground" by everyone in the Holy Land of Martialism. Chu Feng was suspicious about the origins of the volcano that had suddenly appeared from out of nowhere but convinced by his brothers, Zhang Tianyi and Jiang Wushang that the volcano was not dangerous. Unknown to them that there was a monster lurking in the depths of the volcano, a place where they could not reach, that was slowly eating away the happiness in everyone to awaken itself. When Chu Feng tried to warn them about the dangers of the volcano he was berated by Zhang Tianyi, saying that Chu Feng simply fears that they had surpassed his cultivation and they would continue to go farther than him. After the monster in the volcano is awakened by Chu Feng, it proceeded to try to suck away the cultivation it had granted all those who trained using it, but was immediately stopped by Chu Feng. After he easily defeated a monster they were completely powerless against they realized that Chu Feng's cultivation base was in a realm they could never be able to fathom. 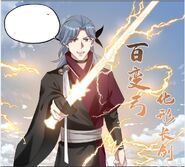 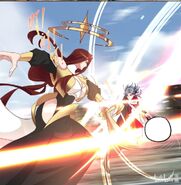